This 78" by 84" painting was my graduate thesis project in 2004. I really put everything into it that i had learned that semester. The figures in the front are pretty much life-sized. Yes, that's me without a beard, but I'm not sure how much it looked like me. 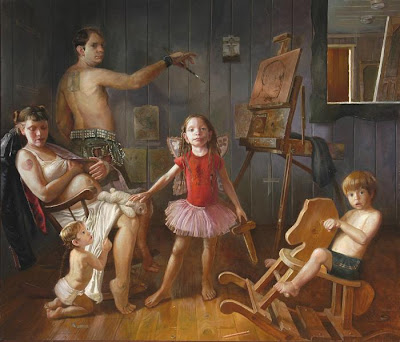 Image of the completed painting as it appears on my website
It sold to the president of Savannah College of Art and Design out of a California gallery. I had the painting shot as a large format transparency and a digital file. I still have the transparency for printing from, but lost the disc with the digital file, and have been unable to get one for my website. Today while looking for a music cd I found a disc with a hi res image of the piece in an almost finished state. I pulled some detail shots from it that really showed me a lot of things I had forgotten about it, and are not visible in the small image on my website. 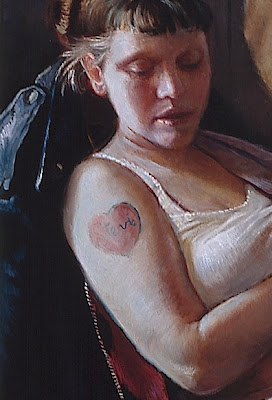 I had forgotten the depth of form that I put into the figures. The studio was beautifully lit by north-facing windows. The "Stevie" tattoo, the zipper and red cowhide on my jacket are nice to see. 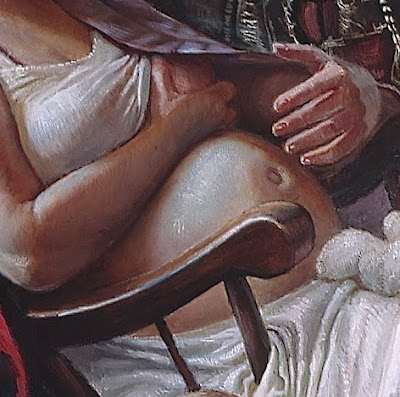 I had forgotten about the ribbed texture on the shirt. I remember being upset at one point at how distressed the surface was, and stuck all over with lumps and brush hairs, but now I think it's great. I'm pushing for that again. 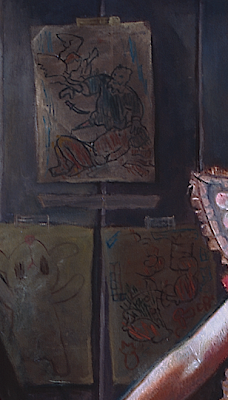 I had also quite forgotten about the coloring page in the background of Rembrandt's Abraham and Isaac. It adds a dash of gravitas and also foreshadows my own version of Abe and Isaac, "Iconoclast". To the bottom left of the detail is Viv's drawing of her Lamby and to the right is a Popeye coloring page to. 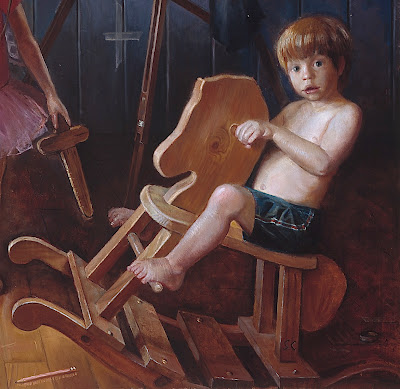 You may have seen the older version of my son in recent paintings, but this is him at three. I love the way the feet grip the little "foot handles". It is a shout out to Velasquez's "Prince Baltazar Carlos On Horseback", one of the many Velasquez references in the painting. 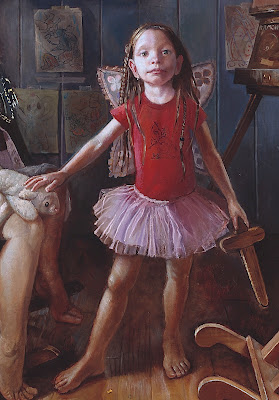 Viv holds Lamby, her favorite toy in one hand and a wooden sword in the other, again a sacrificial symbol, or if you'd rather an allegory of war and peace. On her shirt is the Cowboy Hall of Fame logo, in which a cowboy rears back on a horse, echoing my son's pose.
There is far, far more that I put into the painting symbolically, but I'd rather that they be discovered and wondered about than to explain all of them. 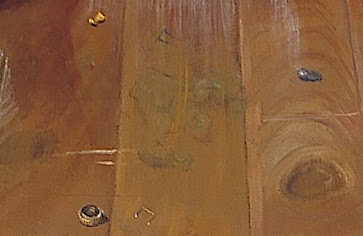 This is a fun little area. There was a torso of a broken green cyclops toy that I had painted out because it was too distracting. There are now bits of kneaded eraser, globs of dry paint, staples, and a paint cap there instead.
Posted by Stephen Cefalo at 4:38 PM 5 comments: Links to this post

Counting to a Thousand

When my son was about five or six he realized that if he took the time he could probably count to one thousand, so I thought it would be a good opportunity to catch him staying fairly still. I painted his bedroom walls like the top of a castle. I hightened the values in the sky to make it feel as if he was actually standing against a sky. The cast shadow, then reminds you it's a wall again.

I blocked in the grisaille from life with transparent browns and tightened up the anatomy from a snapshot. After I had these issues worked out I Posed him again and popped in all the colors from life. It's not much more than an experiment and a memory of my son at that age. I thought it would be interesting to play the cheerful colors against his confrontational pose. 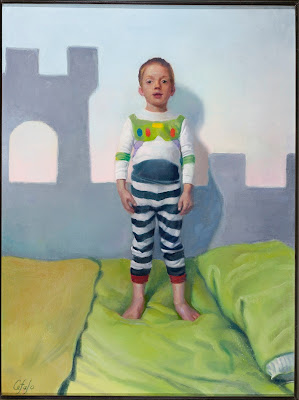 Posted by Stephen Cefalo at 11:28 AM 3 comments: Links to this post

Email ThisBlogThis!Share to TwitterShare to FacebookShare to Pinterest
Labels: Counting To a Thousand, Stephen Cefalo

This is basically a tribute to the Dutch painting. I have always enjoyed the way Rembrandt and other Dutch painters invite the viewer to step into the frame.

It was directly inspired by this Rembrandt at the Chicago Art Museum. Cefalo elsewhere on the web

Promote Your Page Too